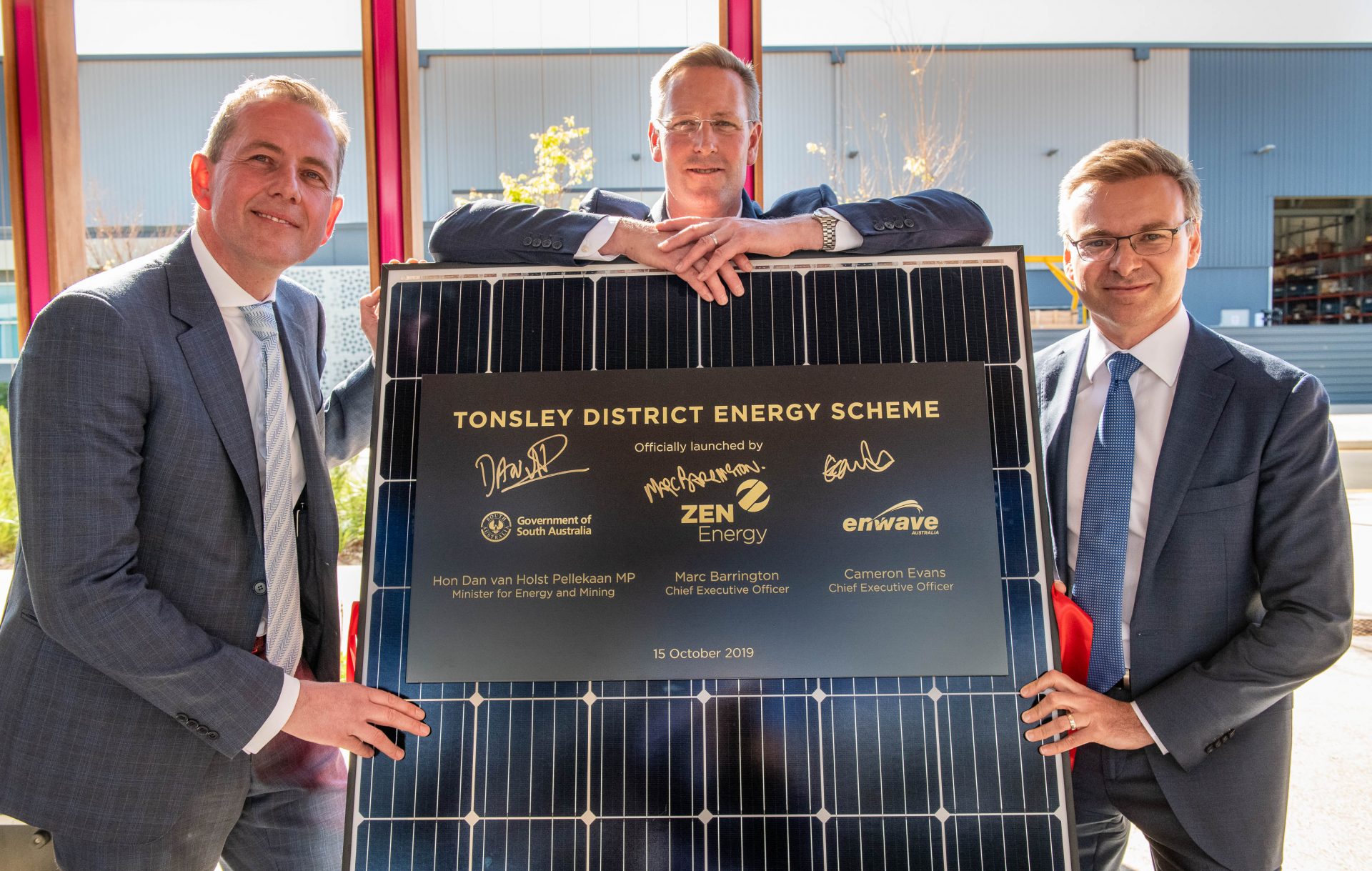 First panels laid for one of Australia’s largest solar arrays

The first rows have been laid on the roof of the Main Assembly Building (MAB) by ZEN Energy, on behalf of Enwave Australia, the owner and operator of the scheme.

They are the first of approximately 7,400 panels which are being installed on the five-hectare MAB roof.

The project will engage up to 40 installers, electricians, engineers and support staff.

Minister for Energy and Mining, Dan van Holst Pellekaan said the array would have a total installed capacity of 2.34MW, providing power for Tonsley businesses, organisations and residents.

“It is the first stage in a plan to increase solar generation capacity to as much as six megawatts, generated by up to 20,000 solar panels, as Tonsley grows over time,” said the Minister.

“The District Energy Scheme demonstrates South Australia’s leadership in the renewable energy sector, and Tonsley is becoming a hub for businesses and innovation in this space." The Hon Dan van Holst Pellekaan, Minister for Energy and Mining

“The solar energy installation will offset as much as 3,500 tonnes of carbon dioxide emissions every year over its lifetime and is part of Tonsley’s commitment to sustainability and innovation, as well as its Six Star Green Star Communities Rating.” said the Minister

The system will optimise solar energy generation for the energy demands of the entire Tonsley precinct, enhancing security of energy supply and providing competitive energy pricing to all customer classes, including commercial and residential.

Businesses at Tonsley will have the choice to buy their electricity from Enwave Australia at competitive market rates and support the site’s shift to cleaner energy or buy from the energy retailer of their choice.

The scheme will later expand to include the provision of recycled water for non-drinking purposes and natural gas for residences in Tonsley Village.

Enwave Australia Chief Executive Officer Cameron Evans said the company was excited to be delivering this critical component of an industry shaping scheme.

“The Tonsley District Energy Scheme has been designed to ensure customers within the district benefit from a reliable, cost effective and renewable supply of energy." Cameron Evans, Enwave Australia Chief Executive Officer

“The rooftop solar installation is a key component of this system, which will be integrated into the wider scheme to ensure all customers benefit from the installation.

“We are proud to be part of this scheme as another key step in the establishment of Tonsley as a leading innovation district,” he said.

GFG Alliance Executive Chairman Sanjeev Gupta said the shift towards renewable energy was a crucial part of ensuring a sustainable future for industry and society.

“Building on Australia’s renewable energy capability is a key to GFG Alliance’s mission and strategy to create sustainable industry around the world,” he said.

“We’re excited about the role that ZEN Energy is playing in this for homes, business, and industry across Australia. We hope to see more projects like the Tonsley District Energy Scheme in the future as we begin to transition and rely more on renewable energy to power our communities." Sanjeev Gupta, GFG Alliance Executive Chairman

“We are delighted to start work on this landmark installation and delivering one of Australia’s largest rooftop solar arrays,” he said.

“The array will work hand in hand with a range of other technologies in the Tonsley District Energy Scheme to showcase how the benefits of renewable energy can be integrated across an entire community, which we’re really excited about.”