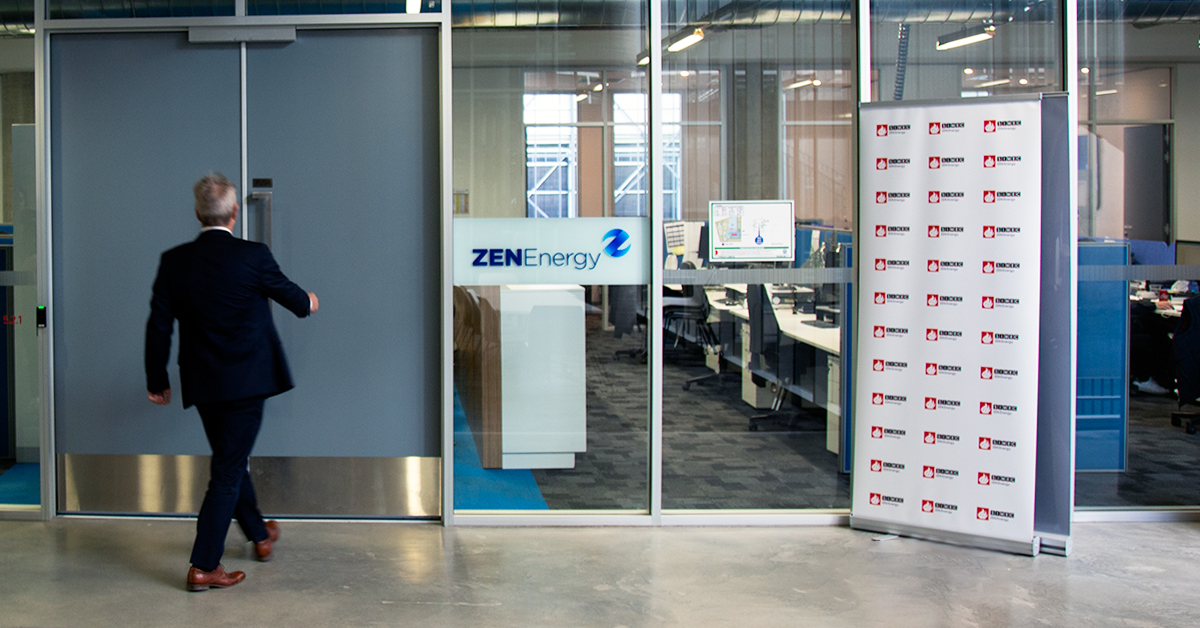 Innovation is born of necessity, and Richard Turner, founder of ZEN Energy, now SIMEC ZEN Energy, discovered that one night, as the sky was darkening, he was faced with a need, that being a request from his children to power a small television and light in their cubby house. Turner rose to the challenge, sourcing a solar panel, a light, inverters, batteries, and switchgear, and by matching all the bits and pieces together he created a 12-volt power system, and to the delight of his children, it did the job.

Turner saw a gap in the market. He put on his marketing hat and determined that there were no technical barriers to making this model into a home energy system.

The timing was critical; newspapers were starting to cover climate change, and John Howard’s government was proposing the first incentives for reducing energy demand in the home. So, sitting at the dining table, as all great businesses are founded, the idea for ZEN Energy was born.

The ZEN brand is an acronym for Zero Energy which is about balancing energy generation and demand, and as our current president Ross Garnaut says now, it's about working towards zero emissions. Richard Turner, Head of Brand and Communications, SIMEC ZEN Energy

Over the past 15 years, the business has been on an incredible journey from ZEN Energy and now through to SIMEC ZEN Energy. From its inception at the dining room table, Turner has been guiding SIMEC ZEN Energy through its many stages of growth.

An acquisition of the company by Sanjeev Gupta’s GFG Alliance in late 2017 has set SIMEC ZEN Energy on its next growth stage as a new electricity retailer committed to delivering innovative, flexible, and transparent energy solutions to Australian business and industry.

The company, which is part of the global energy, metals, engineering and financial services group of the GFG Alliance, aims to lower electricity prices for their customers by using new technologies and Australia’s exceptionally high quality renewable energy resources. The company supplies energy to GFG’s rapidly growing portfolio of mining, metals and industrial companies, as well as the broader customer market. In late 2017 it was awarded a contract to supply all of the South Australian Government’s electricity requirements, and in May 2018 was awarded the electricity supply contract for the South Australian Chamber of Mines and Energy Joint Purchasing Group.

I’m quite innovative, and I loved the idea of collaboration between similar and aligned companies. Richard Turner, Head of Brand and Communications, SIMEC ZEN Energy

As one of Tonsley’s anchor tenants, the team at SIMEC ZEN Energy were drawn to the vision of an innovation district. Approached by Tonsley because of the company’s position as the prime renewable energy company growing at the time nationally, they were quick to come on board and loved the idea of creating a hub for the renewable energy sector.

Since taking up residence on the second floor within the TAFE SA building south of the MAB, they’ve been delighted to witness the establishment of businesses that they work with regularly, like Siemens, SAGE, and Enwave Energy. Furthermore, the co-location of TAFE SA and Flinders University generates ongoing opportunities.

Tonsley Innovation District is not just an address for SIMEC ZEN. Along with other Tonsley partners, SIMEC ZEN Energy is taking a role in the delivery of the Tonsley District Energy Scheme. Being led by Enwave Energy, the scheme will bring all the buildings in the district within one gate meter. This allows Enwave Energy, SIMEC ZEN Energy and other partners to create a model for future townships and communities where they can be as energy self-sufficient as possible. This model involves the installation of one of Australia’s largest solar arrays and a pilot hydrogen production plant. SIMEC ZEN Energy believes it’s fundamental that they get this model right for the country’s economic and environmental benefit, with South Australia set to prosper. By taking advantage of the state of the art facilities at Tonsley, SIMEC ZEN Energy has developed models for sustainable energy solutions that can benefit all Australians.

Are you interested in finding out more about the SIMEC ZEN Energy or Tonsley?

Click here to find out more about SIMEC ZEN Energy